Superintendent Recognized for Work to Promote Sport of Wrestling 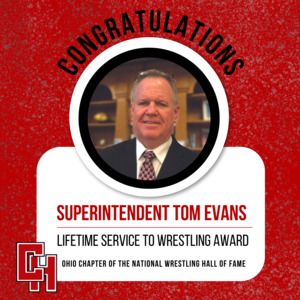 His award recognizes 20+ years given to the development of leadership and citizenship in youth through the sport.

Superintendent Tom Evans has been selected to receive the “Lifetime Service to Wrestling” award from the Ohio Chapter of the National Wrestling Hall of Fame (NWHOF). The award is given in recognition of 20 years or more of dedication to the development of leadership and citizenship in youth through the sport of wrestling.

“This award recognizes that you are leaving behind a legacy that others admire,” said Lee Roy Smith, executive director of the National Wrestling Hall of Fame. “You are leaving your family, friends, and wrestling fans a valuable asset . . . for serving a sport that we all consider worthy of passing onto future generations.”

“Evans is well known throughout the State of Ohio for actively serving the wrestling community as a coach, manager, tournament director, etc. and is well-deserving of this award.” added Ryan Kelber, athletic director for Cuyahoga Heights Schools.

Over the past 20 years, he has helped run and manage a multitude of tournaments and events, including sectionals, districts, the Catholic Invitational,and the Greater Cleveland All-Star Match. He is also a member of the WEOL radio sports Broadcast team. During the wrestling season, he hosts a weekly wrestling wrap-up show and podcast as well as serves as the radio color commentator for Kent State football. In 2019, Evans was inducted to the Ohio Wrestling Officials Hall of Fame. For the past eight years, he has served as the superintendent of the Cuyahoga Heights School District.

Evans was nominated by wrestling officials, coaches, and others associated with the sport. Along with other members of the Class of 2022, he will be formally inducted into the Ohio Chapter of the NWHOF at the Villa Milano Banquet and Conference Center in Columbus on October 9. In addition, he will be recognized at the National Wrestling Hall of Fame and Museum in Stillwater, OK.