Board of Education Organizes for 2022 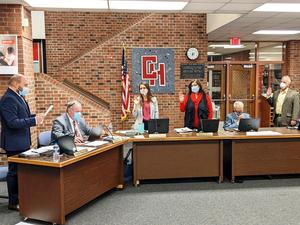 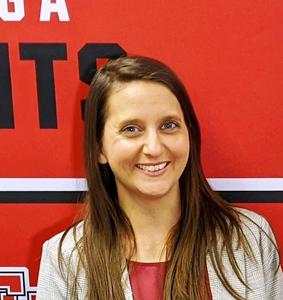 Three members of the Cuyahoga Heights Board of Education were sworn in to four-year terms at the Board’s 2022 Organizational Meeting held on Wednesday, January 5.  District Treasurer Matt Muccio swore in Stephanie Prause to her first four-year term. Re-elected Board members Maria Eder and Mark Dobbins were also sworn into new four-year terms. All three were elected in November 2021 and their terms expire on December 31, 2025.

Prause currently works in corporate communications for a global manufacturing company based in Solon. She has previous experience in corporate communications and human resources for a family-owned manufacturing company in Valley View and in sustainability communications and investor relations at a public relations agency in Cleveland. She holds a Master of Arts degree from The George Washington University and a Bachelor of Arts degree from Miami University (Ohio).

Eder was first elected to the Board in 2018.  She and her husband, Michael have lived in Valley View for more than 25 years. They are the proud parents of two children who attended Cuyahoga Heights Schools from Pre-K through 12th grade.  Anthony graduated in 2011 and Victoria graduated in 2013.

Eder joined the Board after a 35-year career as a broadcast journalist.  She retired from WJW Fox 8 News Cleveland in 2016 where she produced entire newscasts and was a multimedia journalist/on-air reporter. Eder also worked at WYTV-Youngstown as a producer/director. Her first job after college was at WKYC-Cleveland as an assignment desk assistant.

Eder has a Bachelor of Arts degree in Telecommunications from Kent State University.  She is a 1977 graduate of Garfield Heights High School.  She is a huge Cleveland Indians fan, enjoys the arts, and speaks Italian.

A member of the Board since 2016 and currently a resident of Brooklyn Heights, Dobbins has resided in the Cuyahoga Heights School District for most of his life and is a 1975 Cuyahoga Heights High School (CHHS) graduate.  He and his wife, Pam, have two children, Michael and Stephen, who graduated from CHHS in 2006 and 2008 respectively.

Dobbins earned an accounting degree from Cleveland State University and a law degree from the Cleveland-Marshall College of Law. He subsequently earned Ohio CPA and law licenses in 1982. Dobbins was employed as a bank examiner and attorney for 30 years prior to retiring in 2013.

He has served on district finance committees on two occasions and worked on one levy campaign. He also served for many years as treasurer of Brooklyn Heights Home Days, coached his children’s sports teams, and with Pam, co-managed a village-sponsored bowling league. Dobbins is also a past treasurer of the CHHS Alumni Association.

Following the swearing-in, the Board elected officers for 2022.  Dobbins was elected President and Eder, Vice President. Both were elected by unanimous vote. In addition to Prause, Robbins, and Edder, Lyndie Schuckert and Gary Suchocki are also members of the Board. Their terms expire on December 31, 2023.

Regular meetings are open to the public and are held in the High School’s Bahner-Ray Media Center. Special meetings are called as needed.